Dear friends, we’re almost sure to let you become fond to bee’s world, so we’re ready for a new update.

As maybe you could remember, spring is the favourite period for swarm migration.

For everybody who doesn’t know what this phenomenon is:

The swarm migration, which deserves to be supervised and hold in check, involves the departure of part of bee’s family lead by the queen bee in the act of searching a new home. The queen bee and her family’s departure depends on the fact that in the beehive is born a new queen ready to replace the old one. The fly generally takes just a few meters, even if sometimes bees could move themselves for kilometers, and the travelling family could theoretically  move everywhere, even if usually the branches of trees are the favourites areas. Before leaving, bees instead of luggage lay in food, which is the sweet honey, with a view to the period without nourishment being lacking in home. In those first days the beekeeper could intervene and provide to the catch of swarm, giving to bees a new home to stay in. 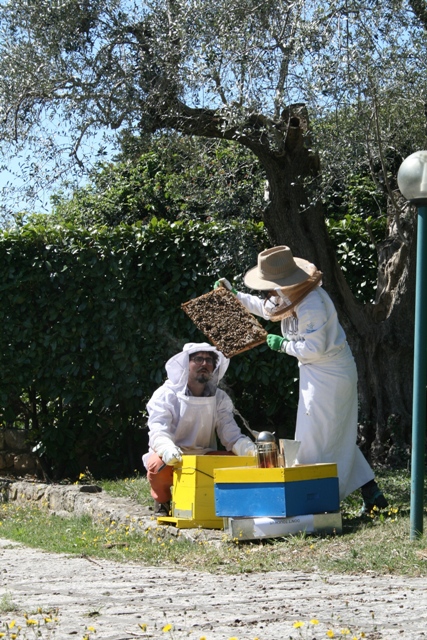 So keep eyes and ears open! If you see a swarm don’t worry: bees are not dangerous if let be in peace, furthermore remember that they are in a hard time of their life as well as temporally without home. The right thing to do is first of all be sure that anybody (people or animals) approaches the swarm, than if it’s possible confine the area and finally call a beekeeper, just like us. Remember that bees are a preserved wildlife and it’s strictly forbidden to use venoms against them. If you don’t know any beekeeper, you can call the Firemen (for Italy: 115), and they will call a beekeeper for you. The capture operation will take about one day, at first the swarm will be gather together and only when it’ll be dark bees will be carry to a new dwelling.

The adventure is going to be continued!